I was 13 years old when I first thought about getting a Tottenham Hotspur tattoo. My older Sister tried to talk me out of it. The year was 1995, Spurs had just sold Jurgen Klinsmann and had “stars” such as Colin Calderwood, Justin Edinburgh and Ian Walker. No disrespect to any of the aforementioned players but household names they were not. 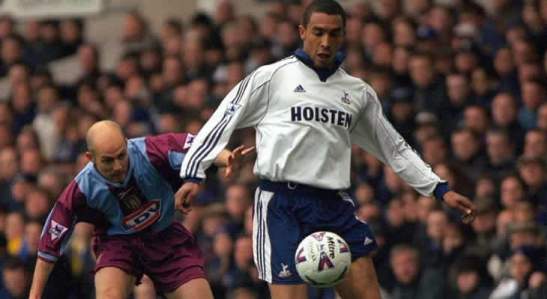 Record signing in 2001 of Chris Armstrong from Crystal Palace for £4.5 million

My parents didn’t have Sky TV then so I’d tune into the now defunct Capital Gold on 1548am (that was the radio frequency for younger readers) on my stereo and I’d lay on my bunk bed and close my eyes whilst listening to Jonathan Pearce describe what the “fickle finger of football fate” would do to my beloved Spurs that week.

For although Spurs had more than our fair share of journeymen, we also had a sprinkling of magic from the likes of Teddy Sheringham and the less heralded, although no less deadly in that season, Chris Armstrong.

“.. close my eyes whilst listening to Jonathan Pearce describe what the ‘fickle finger of football fate’ would do to my beloved Spurs ..”

Throughout my childhood I’d pore over the Spurs player ratings in Match Magazine and I’d look out for players who’d been at Spurs at some point in their careers. I always used to look out for David Leeworthy’s rating as a prime example of this and as a consequence I’d hope his Dover Athletic side had won that week.

Fast Forward to the year 2000 and as an 18 year old I’d decided that if we beat Liverpool at White Hart Lane in a game that I was going to in a few days time, I would get a tattoo. I forget who scored for Liverpool, it may have been Robbie Fowler but Les Ferdinand and Tim Sherwood scored for Spurs in a 2-1 win with a telling contribution for both goals from Stephen Clemence. The class of 2001 was every bit as mediocre as the class of 1995 had been, maybe more so. The teams in the intervening years had also been average to say the least with the odd bit of stardust thrown into the mix.

So 5 days after that Liverpool game I trundled off to Gypsy Nirvana tattoo parlour in Surbiton. I walked out of there a couple of hours later £95 poorer but with a freshly inked tattoo of the Spurs crest on my right shoulder blade. The crest was the cockerel standing on the ball with the Latin inscription “Audere Est Facere” underneath and a lion either side of the ball. That was nearly 15 years ago and I still love it now.

“.. freshly inked tattoo of the Spurs crest on my right shoulder blade.”

Moving on to the year 2014 and having sold Bale to some team from Madrid, I found my enthusiasm for Tottenham tested somewhat. The debacles that were ENIC trying to move Tottenham to Stratford, the “Y word” issue and the club’s partnership with StubHub had all left me emotionally drained. However we had a vital game with “that lot” from the other side of North London one Saturday evening.

I was watching at home with my 4 year old to whom I’d successfully passed on the Tottenham bug. The North London derby was meandering along at 0-0 when Ericksen tackled Flamini high in the attacking third and Lamela collected the loose ball and drove towards the Woolwich penalty area before laying the ball off to Chadli who was advancing on his right shoulder. Chadli despatched the ball into the net and cue pandemonium in the Moore household. I shouted “YESSSSSS!” at the top of my voice and proceeded to pick up my 4 year old son and throw him over my right shoulder before bouncing up and down repeatedly. I was cheering, my son was laughing and my 9 month old daughter and my Wife surveyed the scene with a sense of bewilderment.

Christian Eriksen muscled Flamini off the ball to find Erik Lamela, who picked out Nacer Chadli for an assured finish in the North London Derby on 27 September 2014

The two recurring themes that link the three periods of my life that I’ve described are these:

1) Tottenham have had mediocre players in all 3 periods of time.

2) There have been magic moments or players, sometimes both that have kept me hopelessly addicted to Tottenham Hotspur.

I don’t know what the future will hold but there is a new stadium on the horizon and I do know that I’d rather have Hugo Lloris in goal than Ian Walker!

Sam Moore is a 33 year old Spurs fan from Surrey who’s other passion is Cricket.

2 comments on “Tottenham Hotspur: An Addiction”