SUMMER TRANSFERS Should I stay or should I go?

Last week we had a look at the defenders. Now onto midfield… where to start?

Firstly, I have again tried to put aside the attraction of the “characters” such as Holtby and Sandro… both extremely likeable and marketable players, but when examined purely on what they consistently bought to the team? Hmm… not that much in all honesty.

It is for those reasons that I believe Capoue will be sold on and probably Tommy Carroll after an apparently quite mundane season long loan with Swansea. I saw Capoue’s debut as a substitute at Palace on the opening day last season and the majority of the traveling fans were mightily impressed; a big, strong powerful midfielder almost in the (dare I say it) Vieira mould and by all accounts he could also double as a centre-half.

Well, the centre-half theory was mercilessly destroyed and proven to be grossly exaggerated when Capoue played there a few weeks later. The opposition escapes me (much as they did to Capoue throughout an appalling 90 minutes) but his laid-back style was cruelly undermined in that one game. I believe his standing amongst the THFC faithful was irretrievably dented that night and he has never really looked like he was arsed enough to try and fight his way back into contention.

Meanwhile, Tommy is another one who divides opinion. Personally, I don’t think he will ever be what we need if we are truly aspiring to break into the Top four and beyond. Neat and tidy, but not particularly creative in terms of assists and goals. I have to say that I think his supporters are perhaps blinkered by the fact that he is (another) “one of our own”. However, whilst we would all doubtless love to have seen him break into and stay in the side ala Mason, I don’t think Carroll has ever done enough to warrant a regular run.

So Capoue and Carroll on the move…

That would appear to leave Stambouli, Mason and Bentaleb to fight it out for the two deeper lying roles. I believe that of the two recent regular starters, Bentaleb is a better all-round player than Mason. Whilst both need to add more to their game than just predominantly “be busy”, I am more than happy for both to remain in that starting XI on the proviso that both continue to improve next season.

I like Stambouli. On the occasions that he played, I thought he looked better on the ball when under pressure than both Mason and Bentaleb and he looked a decent player. I would be happy for him to stay at the club, but I wonder if he will fancy a season playing understudy to two “whippersnappers”. An “out of the blue” departure would not totally surprise me…

Regards attacking midfield/wide players, we have what appears to be an abundance of options. Aside from the inevitable departure of Aaron Lennon; (which if viewed totally in footballing terms and without the sentiment attributed to such a long serving player, is surely not a big miss?), we have Dembele, Paulinho, Chadli, Townsend and the enigma that is Lamela all vying for roles across that three behind the striker.

“ Regards attacking midfield/wide players, we have what appears to be an abundance of options.” 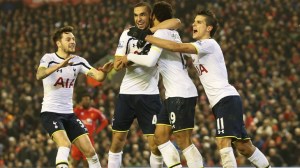 My personal bias finally gets the better of me when I say that Eriksen must start in that central, free-ish role behind the centre-forward, even though his form has been patchy this season. For me he remains the only player we have that is capable of the clever, defence splitting passes that we need when teams park buses in front of us; more pertinently, he is the only midfielder we have who sees the plays quickly enough to pass first time instead of taking extra touches which slow us up.

If I were his manager, I would take him to one side in pre-season.. show him the abundance of YouTube clips that show him beating defenders for sheer fun when he was at Ajax; to remind him exactly what he is capable of and tell him he will play in that central “10” position every week whilst we build the side to suit him. I really believe that Eriksen could be that good for Spurs!

“I really believe that Eriksen could be THAT good for Spurs!”

So who plays either side…  Again, putting the personality to one side and looking purely on the returns seen from performances on the pitch, I have to concede that neither Paulinho or Dembele have done enough to warrant mass hysteria should either leave in the summer.

I recall going to Wembley to see England v Belgium a few seasons ago and watching Dembele run the entire game. A United fan mate of mine told me that he had done exactly the same for Fulham at Old Trafford just a few weeks earlier and the rumours were that Ferguson fancied Moussa to fill the gap left by Scholes retirement.

So I was chuffed to bits when Spurs got him that close season. A powerful, technically gifted midfielder (Danny Murphy describes him as one of the best he’s ever seen/played with), I really thought Dembele was going to be the driving force in our midfield where similarly made players such as Huddlestone and Livermore had failed in recent times. For whatever reason though, Dembele just has not progressed. Injuries have played a part and whether it’s the system he’s asked to play in I don’t know, but three managers have all failed to really get him firing consistently and I wonder if he will be a victim should Pochettino decide to have a clear out in the summer.

“…maybe both Dembele and Paulinho are sold in the summer…”

I would class Paulinho in the same category; another who I liked the look of when I saw him playing for Brazil in the Confederation Cup, but after a reasonable start to his Lilywhite career, he is another who has seemingly lost his way.

It may be a combination of the extra-physical English game not suiting him, although that would surely have been a consideration on both parties behalf before he signed or equally as likely, Spurs have not played a system to get the best out of him? I always thought he had a touch of the Lampard’s about him on the albeit limited times I saw him playing for Brazil.. often arriving late in the box and scoring goals. But we never seem to have got Paulinho into a line-up that allowed him to run past the striker(s) to get into the box.

I would therefore not be surprised if one; or maybe both Dembele and Paulinho are sold in the summer, as I would imagine neither are entirely happy with how their careers have progressed over the past two seasons. Problem is, I doubt Spurs would get much more than £5-7M for either of them now.

And then there’s Eric… and I don’t mean Dier.

As referred to above, our record signing has probably caused as much debate as most regards what exactly he brings to the side: the discussions on our Facebook page alone have often reached boiling point!

Personally… I have to say he has been a massive disappointment. I fully understand that he works hard, that he tackles back more than an attacking midfielder should be expected to, that he is young, that he didn’t set his transfer fee, that his hair dresser should be sued under the trade descriptions act… but the indisputable fact remains that Spurs did pay a massive amount of cash for a player that was brought in for his attacking prowess; and he has not delivered.

At time of writing, his stats say that he has played 32 games this season and scored 4 goals, with 5 assists. Now, I am the first to point out that stats are not the be all and end all, but that is not a return that really excites or inspires. Having played a game less, the often maligned Chadli has the same number of assists but 10 goals. The equally unpredictable Townsend has 2 more goals and 1 less assist but in 11 less appearances.

This leaves us with a dilemma. Assuming that we agree that we need to bring in another attacking option, how would such a signing be funded? Chadli (at the price he cost) represents good value and if he continues to improve at the rate he has done this season could reasonably be expected to maintain his very impressive scoring rate.

Townsend cost nothing and with his English “home-grown” status, represents no gamble by keeping him. Also his direct play, whilst often frustratingly unproductive, is an option that can be used effectively and hopefully improved upon with decent coaching.

So.. If one of these types has to be moved on to fund any potential replacement, my money would be on the Argentine…

If I may clarify here; I personally would love to see Lamela stay at Spurs and explode into the player that he showed all of the signs of becoming at Roma. He could benefit from continued coaching just as much as Townsend or any of our other younger players.

But, the economics would appear to suggest that even if Levy bit the bullet and took a loss on him, Lamela would still probably fetch £15-20M if he were sold. That would be three parts toward a top quality replacement, should one be identified. So whilst I would be a little disappointed should he leave, because I really do think there’s a “Tottenham type” player in there, I would not be inconsolable if an exciting name came in to replace him.

Of the other players who may feature in the fight for a midfield role, there’s a certain Alex Pritchard who has produced some outstanding performances for Brentford, where he has by all accounts spent a loan season tearing up the division! Despite my faith in Eriksen, I would be happy to see young Pritchard given opportunities to push him for that slot behind the strikers if the Dane starts next season like he is ending this one… and Pochetino has proven his willingness to overlook bigger names in favour of young talent, so who knows.

Deli Alli is another youngster who might make an impression. Originally it was suggested he was purchased as “one for the future” but if he is given opportunities, he may also push the more established names for their places having had an impressive season with MK Dons.

“…Capoue, Paulinho and Carroll being the three most likely departures in my view.”

According to my analysis then, we could be seeing the back of Dembele, Carroll, Capoue, Paulinho, Lamela and maybe Stambouli?? Inevitably not all of these players will be allowed to leave… but a combination of any two or three would not surprise me, with Capoue, Paulinho and Carroll being the three most likely departures in my view.

Next week: Jinx takes a look at strikers.

Jinx has been a travelling Spurs fan for over 30 years, during which time he’s been a season ticket holder, a member and has followed the side across Europe. He’s played in, then coached and managed successful teams at both adult and especially junior football, and has two sons who are now following suit at all those levels.

2 comments on “SUMMER TRANSFERS Should I stay or should I go?”

This entry was posted on 12/04/2015 by javadmovahedi in Uncategorized.