It’s only a Mickey Mouse cup

Another season is over, League Cup runners up and a fifth place finish thereby guaranteeing automatic qualification for the Europa League. This is considered a good achievement to most of our fans yet to some the Europa League and League Cup represent a ‘Mickey Mouse cup’. Greg Taylor explores the notion of a ‘Mickey Mouse cup’ and why such competitions are in fact important.

How many times have we heard people say “it’s only a Mickey Mouse cup”?

The Football League Cup, or the ‘ACME’ Cup, or whatever sponsor is the flavour of the year, has often had this accusation laid at its door. It’s a phrase usually used by rivals of the winning club to signify the insignificance of the trophy that has just been won. Even some of our own fans have resorted to calling the League Cup a Mickey Mouse cup, although we are really in no position to diminish the achievement of winning the trophy. We would have been ecstatic to have beaten Chelsea in the 2015 final, the victory being made even sweeter by the fact that we would have beaten one of our two main rivals.

The Europa League (previously the UEFA Cup) also has this stigma attached to it. Some fans would like us to finish outside of the qualifying positions, as they don’t consider it an important enough trophy, and that we should concentrate on gaining a Champion’s League qualifying position in the Premier League. I get this, I really do, but we shouldn’t denigrate the importance of winning such trophies.

In recent years – certainly in terms of league position – we, as a club, have been standing on the rungs of the ladder and looking up, but instead of seeing something pleasurable, like Mel Gibson did when climbing the wall behind Goldie Hawn, and he was treated to a view of Ms. Hawn’s pert buttocks in the movie ‘Bird on a Wire’, we have been treated to the scabby arse of Arsenal FC being waved in our faces.

It looks like we are building something now (not just the stadium) with Mauricio Pochettino at the helm, and that we may one day – hopefully sooner, rather than later –  be in a position to grab the twisted reptile that is Arsenal FC and shove it up its own posterior. But we need a little patience.

They won the Inter-City Fairs Cup in 1970, but UEFA don’t even consider that to be a valid European competition and disassociated themselves from it. Perhaps UEFA consider the Fairs Cup to be a Mickey Mouse cup, because it was devised solely to promote cities in which international business fairs were held. Arsenal might try to point out that they’ve consistently been in the Champions League competition for longer than some of our fans have been alive – BUT THEY’VE NEVER WON IT!

“… be in a position to grab the twisted reptile that is Arsenal FC and shove it up its own posterior.”

We have won three UEFA accredited European trophies. The gooners have only won one. We are definitely not a Champions League side at the moment. We need a few tweaks and a large dose of winning consistency to make that jump. We know that. But isn’t it better to have some silverware in the trophy cabinet? Even if it’s not the Premier League Champions trophy or the European Champions League trophy? Our time will come, but we need some patience. If we win the League Cup or Europa League we will feel surely the same rapture as fans felt in previous times when we fought off domestic and European opponents to win the League Cup and UEFA Cup respectively.

But would you like to know what IS a Mickey Mouse cup?

In Brazil, the main competition is the Campeonato Brasileirão (the equivalent of what was once our four division Football League). It normally takes place between April/May and December. It also has several divisions but nobody really takes any notice of the lower leagues – all eyes are on the Brazilian league. This is not a Mickey Mouse competition.

The Copa do Brasil is a nationally contested competition and the Brazilian equivalent to our FA Cup. Again this is not a Mickey Mouse competition. Let us pause for a few seconds to consider some facts about Brazil…

Brazil is the same size as mainland USA (excluding Alaska). That’s big. Bahia, the state in which I live, is the size of France. For being a state, and not a country – that’s big. After the end of the Brasileirão, there is no break. The teams go directly into the State championships which are held from January to April/May. The players are allowed Christmas off – most Brazilians will walk over glass to be with the whole family at Christmas – but that is brief respite. Add to that the Copa de Libertadores (the equivalent to our Champions League) running from February to June and the Copa Sul-Americana (equal to our Europa League) running from July to December, and you can see how little time for rest there is. 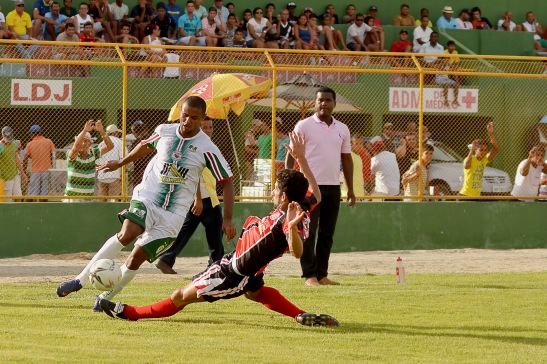 Juazeirense vs Vitória in a Bahia State Championship game in Juazeiro’s stadium.

Can you see why Paulinho may have been exhausted? Consider that as a Brazilian international player, and probably the first name on the Corinthian’s team sheet each week, he would have played even more games than the average player. We are saying that Tottenham’s recent dip in form may be due to tiredness, particularly in the recent game against Manchester City when tiredness was offered by many as an excuse for Mason’s and Eriksen’s lacklustre performances.

Playing consistently in the Premier League and Europa League is nothing compared to what Paulinho has gone through in recent years – remember he came straight from playing in the 2013 Confederations Cup (where he was awarded the Bronze Ball as the third best player) to join Tottenham at the beginning of our season. Is it a coincidence that this season he has played less competitive football, not forgotten but not used incessantly by Pochettino, and in recent matches has begun to show the spark that he came to us with?

So… Back to the State Championships. The Mickey Mouse competition. Why do I call it that?

As I said previously, Bahia is a very large state. About 25% of the population is situated in and around the city of Salvador da Bahia. But it is dotted with hundreds of smaller towns and cities, most of which have a football team – remember, this IS Brazil we’re talking about! The two top teams, Bahia and Vitória (based in the city of Salvador), can be expected to travel up to 900km to play matches. Of course the distances are greater in the national competition but they can travel by plane, stay in decent hotels, and are usually playing on decent pitches against the top Brazilian teams.

In the State championships, they have to travel along poorly maintained roads – many full of potholes – for maybe 12 hours and that’s only if there is no traffic. There are no airports in these other towns. They are then expected to play on a pitch full of bumps, divots, and patches of dried mud that would have made Dnipro’s pitch seem pristine, against a team of agricultural workers, shopkeepers, and the unemployed, the crowds sometimes defying the definition of that word as they can often scarcely outnumber the number of people on the pitch.

Both Bahia and Vitória have substantial fan-bases but most of their fans cannot afford to follow their team around their state, let alone the country. Are these games worth it? For the residents of these small towns, of course. But for a team aspiring to gain promotion from Campeonato Brasileiro Série B to Campeonato Brasileiro Série A (both teams were relegated last season), it is surely an unnecessary and costly inconvenience.

As fellow Spurs fan Tim Vickery pointed out in an interview on Brazilian TV, the Brasileirão campaign often starts with clubs fielding understrength reserve teams because their first team players are worn out. That can’t be right!

When he’s not sweating because of the tropical heat in northeast Brazil or because of the unpredictability of his beloved Tottenham Hotspur’s performances, Greg can be found teaching English to Brazilians or working on his fledgling novelist career. His first novel ‘Virtual Messiah’ can be found as an e-book on Smashwords, Amazon, and iTunes, and his second novel, a sci-fi thriller ‘Body and Soul – Revelation’ is currently with literary agents.

This entry was posted on 02/06/2015 by javadmovahedi in Uncategorized and tagged COYS, premier league, spurs, tottenham fc, uefa, UEFA League.