WOLFE ON SPURS #3: The Pacquiao Defence

On Saturday night, along with roughly 98% of the world’s population, I watched two grown men in silly shorts punch each other as humanity hoped to momentarily satisfy our latent blood-lust. It was billed as the fight of the century, the fight we were all waiting for, the fight to end all fights.

In fact, so many people watched this fight that at literally the last minute, the promoters had to delay the start time simply because too many people were trying to watch at the same time. We can put people on the moon but we can’t solve the broadcast television equivalent of trying to open a car door while someone simultaneously tries to unlock it.

And twelve hours later, in an almost perfect symmetry, Chelsea Football Club clinched the Premier League title. A few hours after that, Tottenham fell to Manchester City at home and the Spurs faithful continued their project of eating their own.

“Pochettino doesn’t have a plan B!”

“Our defence is suicidal at best!”

“Lamela will not now, nor never, do anything right!” 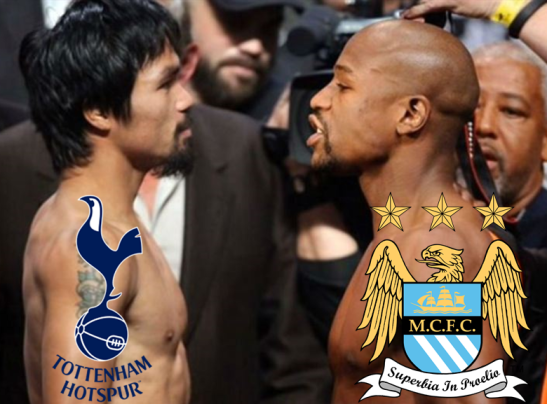 Here’s the thing: Chelsea is to Mayweather, as Pacquiao is to… well if not specifically Tottenham then certainly every other team in the Premier League. Mayweather has won every single fight he’s ever fought by not punching and by not letting his opponent punch. Chelsea has won the league by gifting possession to their opponents and turning the game into a race to the bottom — inverting the beautiful game into a dull affair.

If you’re a Chelsea fan, you’re not reading this. But if you’re a Mayweather fan then you have to give Chelsea credit for a job well done. I suspect, however, that despite his gooner leanings most Spurs fans are Pacquiao fans.

At the final bell I thought, “man I wish Pac had just gone for it. I wish he’d just laid it all out and risked getting KO’d if only for the chance of laying out a man whose nickname is literally “money.” And at the final whistle I thought, “man I thought we did really well. Can’t wait for the next few games.”

I would rather support the Spurs side that lost 0-1 to City at home but played like it meant something than any other team in the world. I much prefer a beautiful combination of passes that leads to a chance pounded off Joe Hart, over a slow grind to the end of the season. Even if that slow grind leads to a points tally record.

“Lamela was superb, fighting like a madman to maintain possession, creating and unleashing a couple of great chances…”

Manny Pacquiao and Floyd Mayweather had literally no incentive to play for. They were splitting the enormous purse 60%-40% regardless of who won. They each made in the vicinity of $200Million. They had no reason to fight other than to entertain us. And they failed on that score at least.

Tottenham and Man City had only slightly more incentive. City was at only the slightest risk of losing their Champions League berth, and Tottenham had only the slightest chance of keeping their Champions League hopes alive. But in the end, the incentive was basically the same as the boxing match. We don’t really want Europa league (as evidenced by the inexplicable fan desires on social media and Pochettino’s recent quotes in the press)and City doesn’t really face a threat to lose out to Liverpool.

And yet, that was one of the most entertaining games of football I’ve watched in a very long time.

Lamela was superb, fighting like a madman to maintain possession, creating and unleashing a couple of great chances, and always putting in one last little touch to keep a dying attack alive. More than once he showed us what he is capable of — taking on what felt like the entire City defence. If you don’t like his price tag, that’s fine but the statistics prove that he’s been an outstanding performer for our side and I sincerely hope he returns.

Harry Kane of Spurs is foiled by goalkeeper Joe Hart of Manchester City during the match on 3 May 2015.

Kane was a powerful threat. Powerful enough to create openings for our lesser players that they really should have/could have finished.

Chadli was good, Bentaleb was great. Rose and Dier were outstanding as was Jan, Fazio and Lloris.

In fact, the only weaknesses in the side came from a still-underperforming Eriksen and a very tired looking Mason. As our season is effectively over, I’d like to see both of them rested the next game and some young up-and-comers filling their spots (unless Europe is going to be a priority then all bets are off).

And even the rococo substitutions at the end of the match were a joy to watch. Every single striker was on the pitch. Think about that. Adebayor, Soldado and Kane all being thrown at the Manchester defence, literally inviting them to punch us back. Saying: “we don’t care if we get knocked out in the 12th round, if we don’t go down in a blaze of glory it is better to have never kicked-off in the first place.”

We were all going to be disappointed at the final whistle. Especially after we started so brightly. But then, this whole season is exactly that writ large. We outperformed, outpaced, and confounded our expectations. We beat Chelsea, Woolwich, and went to Wembley. We saw hat-tricks, rabonas, elbonas, last minute winners, and the emergence of genuine stars and reemergence of past favorites. And we’ve done all of this with a new head coach and a problematic set of players.

“In fact, the only weaknesses in the side came from a still-underperforming Eriksen and a very tired looking Mason.”

At the end of the fight on Saturday my friend (a lifelong boxing fan and huge Pacquiao guy) sighed in relief that Pacquiao hadn’t been embarrassed by Mayweather — that he wasn’t even hurt at all. I was disappointed. Not because of my own latent bloodlust, but because it was indicative of how nothing of an event it was. How utterly Chels-tastic a fight.

And at the end of the Spurs/City game I turned off Facebook notifications, opened the window and thought, “it’s a shame we didn’t win, but boy that was fun.” I’d recommend doing the same. As always tends to be the case: we may not have been as good as we hoped we would be, but we certainly weren’t as bad as many will say we were. But most importantly: we weren’t Pacquiao/Mayweather. At least we came to play.

AND NOW AARON’S TOTALLY RANDOM SCORING SYSTEM FOR THE GAME:

On a scale of Rocky movies — where Rocky 6 is clearly the worst — this game was…ROCKY 1! That’s right, I’m ranking this as the single best Rocky movie that exists.

SPOILER ALERT: Rocky loses at the end of the film. It’s not until Rocky II that he actually defeats Apollo Creed. But the narrative arc of Rocky isn’t about winning, it’s about falling in love, it’s about overcoming grief, and it’s about outpacing your expectations.

AND NOW AARON’S PREDICTIONS FOR NEXT WEEK’S GAME:

Our next game is away at Stoke. We will win 3-0. And afterwards someone will ask “yeah but could they do it on a cold night in Stoke?” And I will mourn the death of human intelligence.

4 comments on “WOLFE ON SPURS #3: The Pacquiao Defence”